Peace & All Good with Archbishop Hartmayer

Peace & All Good is a new program hosted by Archbishop Gregory J. Hartmayer, Archbishop of Atlanta, as he explores God-filled life experiences with local parishioners about a range of topics near and dear to the Archbishop’s heart. The initial five-episode unique series is brought to you in part by the Catholic Foundation of North Georgia and moderated by Fr. Michael Silloway, pastor of Christ Our King and Savior.

Topics and guests featured on Peace & All Good:

The Most Reverend Gregory John Hartmayer, OFM, Conv., was installed as Archbishop of Atlanta on May 6, 2020. Previously, he was the 14th Bishop of Savannah since 2011. Before being named bishop, he was pastor of St. Philip Benizi Church in Jonesboro, where he served for 15 years, and then he was appointed pastor of St. John Vianney parish in Lithia Springs.

Upon graduation from high school, he joined the Conventual Franciscan Friars at their Novitiate of St. Joseph Cupertino in Ellicott City, Maryland, and professed his solemn vows as a Conventual Franciscan Friar on Aug. 15, 1973. He entered theological studies at St. Anthony-on-Hudson Seminary in Rensselaer, New York, earning a Master of Divinity degree and was ordained a priest on May 5, 1979.

Archbishop Hartmayer holds a Master of Arts degree in pastoral counseling from Emmanuel College in Boston, Massachusetts, and a Master of Education degree in secondary Catholic school administration from Boston College.

Throughout his religious life as a Conventual Franciscan Friar, Archbishop Hartmayer held numerous positions as guardian of friaries and chaired the Province Commissions on Parochial Concerns and Franciscan Life.

For a complete bio, visit the Archdiocese of Atlanta website. 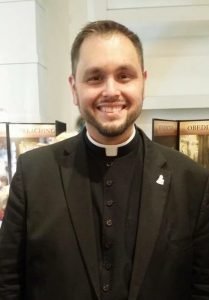 Fr. Michael Silloway is pastor of Christ Our King and Savior in Greensboro, Georgia.

Fr. Silloway became a seminarian for the Archdiocese of Atlanta in 2003 and was transferred to Franciscan University of Steubenville in Ohio to complete his undergraduate degree in Theology and the necessary requirements for seminary. He also studied in Rome, Italy, at the Pontifical North American College where he earned a Sacred Theology Bachelor’s degree from the Pontifical Gregorian University and a Sacred Theology Licentiate from the Lateran University’s St. John Paul II Pontifical Institute for Studies in Marriage and the Family. He was ordained a deacon in St. Peter’s Basilica in 2009 and a priest of Jesus Christ forever at the Cathedral of Christ the King in Atlanta on June 26, 2010.

The phrase “Peace and All Good” is associated with the Franciscans. St. Francis and his brothers would go out in small groups preaching penance, wishing those they met, “peace and all good,” while proclaiming the Good News of Jesus Christ. After a period of time they would return together at a designated spot to pray, share their experiences, and renew themselves in their way of life.